The castle of Bytów 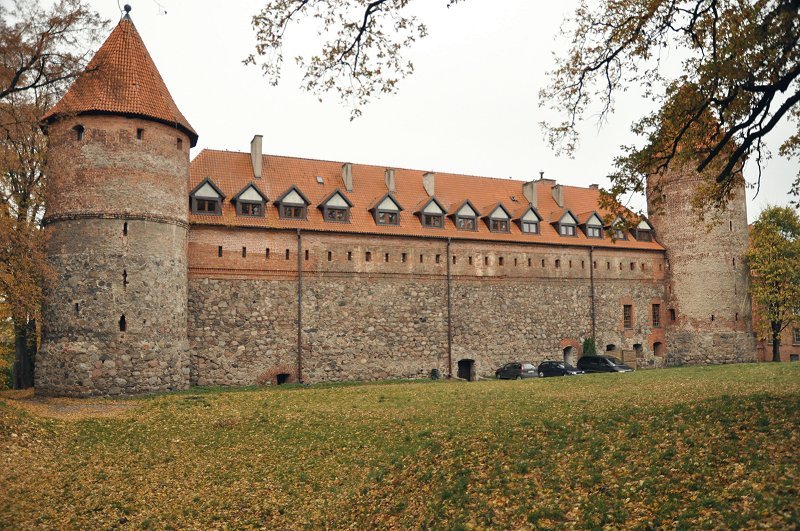 Diaporama at the bottom of the page

Poland, Pomerania Voivodeship, around 90 km west of Gdańsk and 55 km south-east of Słupsk, town of Bytów.

The first texts mentioning the existence of a village in Bytów date back to 1113 and are found in the chronicle of Gallus Anonymus(1). These texts mention the seizing of the "Castrum Bitom" by the army of the King of Poland Bolesław III Krzywousty who then integrated it to the Duchy of Pomerania. Around 1176, they built a church which was incorporated into the diocese of Kamień Pomorski. At the end of the 13th century, the entire region was incorporated into the German Brandeburg.

In 1321, texts mentioned its name as "Bütow" when the Prince Warcisław IV(2) gave that territory and all its income to its Marshall, Henning von Behr(3). A few years later, in 1329, the son of Henning von Behr sold all its rights in the town and its income to the Teutonic Order, became new Master of Pomerania in the beginning of the 14th century, in exchange of a rent of 800 dinars.

In 1335, the Teutonic Order built a presbytery in the village which increased its importance. In 1346, the Great Master Heinrich Dusemer granted the charter of City to the town of Bütow according to the Right of Kulm(4). At that period, Bytów was already the seat of a preceptory because its preceptor was named in documents as Albrecht von Leesten(5).

In 1390, the Teutonic Knights began the building of a castle, probably onto the site of the ancient gród(6) conquered by Bolesław III Krzywousty, on a hill located south-east of the city. These works were supervised by Nikolaus von Fellenstein(7), one of the most famous architects of the Order, and finished in 1405.
From its creation, the castle was not only used by the Order as an administrative place for a preceptory, but still as military base for the survey of its border(8), and as hostelry for the knights coming from the West on their travel to Malbork.

The castle was built on a small headland surrounded by a small river on three sides.
It was based on a rectangular plan of roughly size of 49x70 meters.
As all the other Teutonic castles in the area, this one was also built with red bricks onto a stone base. Three corners are provided with round towers, while the fourth one is provided by the square dungeon.
On the north-west wing, they built a building with three floors and cellars. It was the most important building in the castle. It included the house of the preceptor, the canteen, the chapel and store places in the upper levels.
In the south-west wing were the kitchen with their outbuildings.
The main gate was located in the north-east wall. That gate was protected by a large ditch and a drawbridge.

In 1410, after the defeat of the Teutonic army at Grunwald, the castle was occupied by the Polish army, but was returned to the Order after the signature of the Treaty of Toruń(9).

During the 13 Years War(10), the castle was once again conquered by the Polish troops and in 1466, after the signature of the Second Treaty of Toruń(11), king of Poland Casimir IV(12) gave it to the Duke of Pomerania Eryk II(13).

In the beginning of the 16th century, the fortifications of the castle were improved for the use of artillery and earth bastions are erected around it.
During the 17th century, new buildings as a bakery and a brewery were added in the castle.

After the death of Bogusław XIV(14), last representative of the Gryffin Dynasty, the castle came back under Polish crown control and became the seat of town administration.

In 1656, during the long war between Poland and Sweden(15), the castle was largely destroyed. In accordance with the Treaty of Welawa and Bydgoszcz(16) signed in 1657, the whole region of Bytów and Lębork were given up to the Elector of Brandeburg Frederic-William I(17).

During the 19th century, the castle was converted into a court and a prison.
A first restoration of the whole building was made in the years 1930-1939.
In the end, the castle was completely rebuilt in two steps, between 1957-1962 and 1969-1990. Now, it is occupied by a hotel, a restaurant, a library and the rural museum of Western Kashubia.

(1)The Gallus Anonymus is a medieval chronicler, the first to write a chronicle of the history of Poland (Cronicae and gesta ducum sive principum Polonorum). He would have lived in Poland at the time of the reign of Bolesław III Krzywousty, at the end of the 11th - beginning of the 12th century. His work is incomplete and ends abruptly in the year 1113, perhaps because of his death.

(3)Important family belonging to the Germanic nobility and originating from Lower Saxony. A branch of this family settled in Pomerania during the 13th century.

(4)System of reciprocal privileges granted by the Teutonic Order to certain towns situated in the eastern lands. It was shaped by a charter of December 28th, 1233, established in Chelmno (Kulm) under the direction of Grand Master Herman von Salza. It is inspired in part by the law of Magdeburg with regards to the legal system and the law of Flanders with regards to the system of the law of succession.

(5)Mentioned in 1342. His successor will be a certain Nikolaus von Frantzen, mentioned him in 1354.

(6)A gród is a fortification made of wood and of clay, often a small village or hamlet of some houses surrounded by a boarding, with or without keep or watch tower.

(7)He also worked on the expansion and development of the fortress of Malbork.

(8)Bytów is located along the border between the territories of the Order and the Principality of Słupsk.

(9)It is the first Toruń peace treaty signed on 01st February 1411 between the Polish-Lithuanian Union and the Teutonic Order, ending a two-year war between 1409 and 1411. Following this peace agreement, the Teutonic Order renounced its claims on the Lithuanian province of Samogitia for the duration of the reign of the King of Poland Władysław II Jagiełło and the Grand Duke of Lithuania Vitold the Great. Poland obtained the territory of Dobrzyń and its ally of Mazovia obtained the territory of Wkra. On the other hand, Pomerelia and the Prussian possessions taken by the King of Poland in the summer of 1410, after the battle of Grunwald, were returned to the Order.

(10)It is the Thirteen Years War, a new war between the Teutonic Order and the Kingdom of Poland from 1454 to 1466. It ended with the victory of Poland and the 2nd Treaty of Toruń signed by both belligerents in 1466.

(11)The second Treaty of Toruń confirmed the victory of King Casimir IV Jagiełło over the Teutonic Knights. It was concluded at the beginning of October 1466 and ended the Thirteen Years' War. Following this treaty, the Teutonic Order surrendered to the kingdom of Poland eastern Pomerania, the territories of the commanders of Elbląg (Elbing), Malbork (Marienburg) and Chełmno (Kulm). The rest of Prussia, still belonging to the Order, would have to recognize the Polish suzerainty.

(13)Eryk II of Pomerania, a member of the family of the Greifen (or Gryfici) - a name derived from the Griffon on the coat of arms of this family - was born around 1420. He is the son of Warcisław IX of Pomerania and Sophia of Saxe-Lauenburg . He inherited the Duchy of Wolgast in 1457 and Pomerania in 1464. He died in 1474.

(14)Bogusław XIV was the last Duke of Pomerania. He was the son of Bogusław XIII of Pomerania and his first wife Claire of Brunswick-Lüneburg. He was born on March31st 1580. He became Duke of all Pomerania in 1620. He died without children on 10 March 1637.

(15)This war is also known as the "Swedish Deluge" (Potop in Polish) or First Nordic War. It began in 1655 with the invasion of the west of the Republic of Poland-Lithuania by Sweden. The death of the King of Sweden Charles X Gustave on February 23, 1660 provoked the end of the war, and the signature of the treaty of peace of Oliwa the 23 of April of the same year.

(16)The treaties of Welawa (now Znamensk in the Kaliningrad Oblast in Russia) and Bydgoszcz are two treaties signed in 1657 between the King of Poland John II Casimir Vasa and Frederick William of Brandenburg, Duke of Prussia and Brandenburg. These two treaties endorse changes of suzerainty over certain territories in exchange for a military alliance between the Duchy of Prussia-Brandenburg and Poland against Sweden.

(17)Frederick William of Brandenburg, Duke of Brandenburg-Prussia, and Great Elector of Brandenburg. He was the eldest son of Georges-Wilhelm I of Brandenburg and Elizabeth-Charlotte of the Palatinate. He was born on February 19th 1620 in Cölln and died on May 9th 1688 in Potsdam.