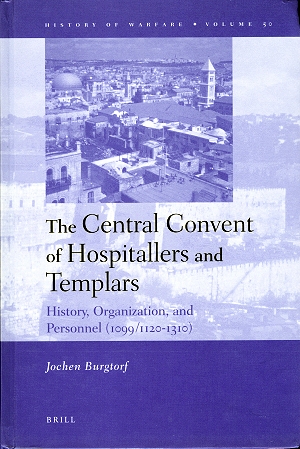 The Central Convent of Hospitalers and Templars
History, Organization and Personel (1099/1120-1310)

From their humble beginnings in Jerusalem as a late eleventh-century hospital and an early twelfth-century pilgrim escort, Hospitallers and Templars evolved into international military religious orders, engaged in numerous charitable, economic, and military pursuits.

At the heart of each of these communities, and in many ways a mirror of their growth and adaptability, was a central convent led by several high officials and headquartered first in Jerusalem (to 1187), then in Acre (1191-1291), and then on Cyprus (since 1291), from where the Hospitallers conquered Rhodes (1306-1310), and where fate in the form of a heresy trial caught up with the Templars.

The history, organization, and personnel of these two central convents to 1310 are the subject of this comparative study.

Jochen Burgtorf, Ph.D. (2001) in Medieval History, Heinrich-Heine-Universität Düsseldorf, is Associate Professor of Medieval History at California State University, Fullerton. He has published several articles on the Hospitallers and Templars, and co-edited International Mobility in the Militäry Orders (Cardiff, 2006).